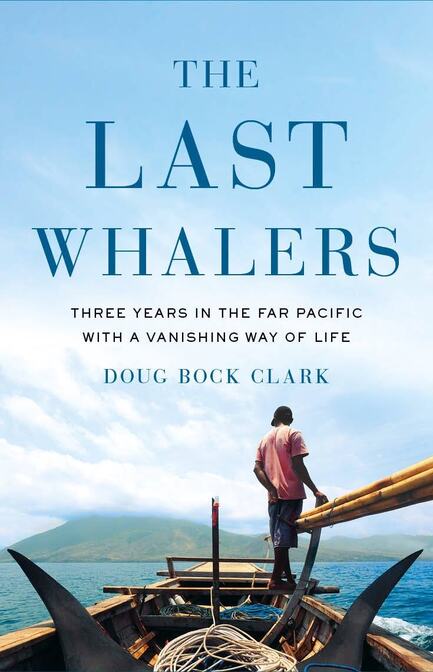 "An immersive, densely reported, and altogether remarkable first book... The story has the texture and coloring of a first-rate novel... [a] feat of journalism... You finish The Last Whalers with hope for the Lamalerans, and hope that Clark writes many more books." ―Dwight Garner, The New York Times

"A vital, immersive and elegant debut. With glittering prose and a novelist’s knack for storytelling, Clark carries readers to the heart of this community as they try to manage and adapt to the tidal wave of change."―Elizabeth Rush, The New York Times Book Review

"An immersive and absorbing chronicle that takes the reader deep into the lives of this tribe and is told with a richness of interior detail that renders their lives, and the choices they face, not just comprehensible but somehow familiar..."―Gabriel Thompson, San Francisco Chronicle

"A forceful debut... Clark's prose soars... His finely wrought, deeply reported, and highly empathetic account is a human-level testament to dignity in the face of loss ."―Tim Sohn, Outside Magazine

"The Last Whalers is an extraordinary feat of reportage and illumination." ―Leslie Jamison, New York Times bestselling author of The The Empathy Exams

​Available  at Amazon, Barnes & Noble, IndieBound, and wherever books are sold.

Doug Bock Clark is a GQ Correspondent and a contributor for the website of The New Yorker. His journalism has received numerous honors, including winning the Arthur L. Carter Reporting Award and being a finalist for the Livingston Award in International Reporting. His first book, The Last Whalers, was one of The New York Times's 100 Notable Books of 2019 and awarded the Lowell Thomas Travel Book Award Silver Medal, among other honors. He also produced the feature documentary Assassins, which premiered at Sundance in January 2020 and which will be out in theaters in December 2020.

His articles have appeared in The New York Times, GQ, WIRED, ELLE, Rolling Stone, Men's Journal, Esquire, The New Republic, The Atavist, Mother Jones, Foreign Policy, The Huffington Post, BuzzFeed, The New York Times Book Review, and the website of The New Yorker. His many journalism honors include the Reporting Award from the Arthur L. Carter Journalism Institute,  two Fulbright Fellowships, two grants from the Pulitzer Center on Crisis Reporting, an 11th Hour Food and Farming Fellowship, and a Glimpse Fellowship, a travel writing grant partly sponsored by National Geographic. He has also been a finalist for the Livingston Award in International Reporting, the Excellence-in-Features Award from the Society for Features Journalists, and the Mirror Award.  Five of his articles have been nominated by their publications for the National Magazine Award.  His writing has been anthologized by Oxford University Press, translated into many languages, and featured as the #1 pick of the week multiple times by Longform, Longreads, and The Sunday Long Reads. The Sunday Long Reads also selected one of his feature articles as among the best of 2019.  He has been interviewed about his work on CNN, BBC, NPR, and ABC's 20/20.

His first book, The Last Whalers: Three Years in the Far Pacific with a Courageous Tribe and a Vanishing Way of Life, chronicles life in an indigenous tribe that hunts sperm whales with bamboo harpoons. It was a New York Times's 100 Notable Book for 2019, won the 2019 Lowell Thomas Travel Book Award Silver Medal, and was a finalist for the William Saroyan International Writing Prize. The New York Times twice selected it as an Editor's Choice and praised it as "an immersive, densely reported, and altogether remarkable first book." The Telegraph also selected it as one of the best travel books of 2019. It is available now at Amazon, Barnes & Noble, IndieBound, and wherever books are sold. Editions have been published or are forthcoming in England, Japan, Korea, France, Spain, China, and Commonweath nations.

He produced the feature documentary Assassins, which premiered at the Sundance Film Festival in January 2020 and will be out in cinemas soon. Early reviews have called it “exhilarating, fascinating, and ultimately tragic,” “piercingly observant,” and promised, “as you watch the movie… there are moments your jaw will drop.”

He is a Visiting Scholar at New York University's Arthur L. Carter Journalism Institute. He has reported from more than a dozen countries, and he often shoots the photos for his stories, with his pictures having appeared in The New York Times, WIRED, The New Republic, Men's Journal, Mother Jones, ELLE, BuzzFeed, The South China Morning Post, Der Spiegel, Courier Japan, ​and other publications. He is the first person to have kayaked the middle section of Myanmar's Irrawaddy River.

PERSONAL NOTE: I recently wrote an article about John Chau, an American missionary who tried to convert the world's most isolated tribe. I am still enthralled by this story. If you knew John and would like to share any thoughts, please reach out to me using the contact form.
Subscribe to my newsletter (below) or follow me on Twitter